The 40th Annual Spring Water Festival will be held this Friday and Saturday, August 27 & 28 in Williamston’s Mineral Spring Park.

The festival will feature a variety of performers on the Park’s Center Stage and the Amphitheater Stage.

The 2021 Spring Water Festival will kick off on Friday evening with live music by Blue Sky Blues Band and the Carolina Coast Band.

The Carolina Coast Band features some of the Upstate’s most talented professional musicians. Included are Joey Werner, the band’s manager plays keyboards and is a lead vocalist having performed with many artists, including early stints as a drummer with the original members of the Swingin’ Medallions”. Frank Wilkie is bass guitarist and toured internationally with The Marshall Tucker Band, Rickey Godfrey Band, and Garfeel Ruff Band. Kym McKinnon is lead guitarist and lead vocalist and toured nationally with Nappy Brown. Big Tez Sherard is on drums and lead vocals and tours frequently with National Artist, Edwin McCain. Tez has worked with other artists such as Darius Rucker, and The Tams.
Alan Nowell is on saxes, woodwinds, and vocals. Rhonda McDaniel, Ten year CBMA Female Vocalist of the Year, and recording artist with several #1 Hits, adds talents of both vocals and keyboards to give the band a great shag and beach music show.
Rickey Godfrey of Nashville, TN, is on guitar, keyboards, and lead vocals. Rickey is an beach and blues artist and the recipient of many CBMA awards including a song of the year and male vocalist of the year. He took the Blues Artist award for the City of Nashville in 2018. Ron Davis will be on trumpet.

Ten special selected food vendors will offer a variety of delicious festival food items and specialties. Beer and wine will be available at this years festival.

On Saturday, activities will begin with an Opening Ceremony at 9:15 a.m. Music lovers are invited to bring a lawn chair or blanket and enjoy a day of music and other activities.

New this year will be a Golf Cart parade at 5 p.m. Carts will meet in the Town Square Center parking lot at 4:30 for staging. Carts will parade through downtown and West Main St. entering the park near the fire department and park near the Amphitheater Stage.

ABC Amusements will bring a variety of new rides. Wrist bands for unlimited rides will be sold Friday evening.

Alive Wesleyan Church will provide an expanded area of free children’s games and activities with a foam pit, golf course and games. Guthrie Grove Church will return with a puppet show, games and other activities for children.

Bob Seymore of Atlanta will bring the fantastic world of STATUARY back to Williamston depicting the town’s founder West Allen Williams.

Vendors from the Upstate and surrounding states will join local vendors to display and sell handmade items in the craft area while local and regional businesses and non-profits will provide information in the display section along the sidewalk.

The festival will again feature one of the Upstate’s largest antique and classic auto shows. There will be awards in a number of categories.

The Williamston Fire Department organizes the car show which features more than 100 vehicles and they will offer rides on the restored 1936 firetruck, a festival favorite.

Parking and admission is free. Additional details and entertainment schedules are included in a Special Program Tabloid in this week’s Journal and on the festival website at www.springwaterfestival.com.

The 40th Annual Spring Water Festival will be Aug. 27 & 28, 2021 in Williamston’s
Mineral Spring Park. The Springwater Committee is excited that our two day outdoor festival will take place in August and in addition to celebrating our 40th year, this year’s festival will include new and exciting attractions, extended hours on Saturday and more entertainment.

Announcements will be coming soon!

As of April 5 we are planning to hold our Spring Water Festival in August of this year.
Of course, this will depend on the coronavirus situation through the summer and into August, and local and state guidelines at the time. The Springwater Committee usually begins meeting in March/April to begin planning for our festival, so we should know by June where things are.
Since all activities will be held outside in Mineral Spring Park, we feel we can go by guidelines at that time regarding COVID-19, possible including social distancing and face masks by festival goers in more crowded areas. We may have to look at children’s rides to see what state guidelines are in effect later this year.
Our business and craft vendors most likely will be spaced out to every other normal space, allowing a 10-12 ft distance between each vendor.
This may reduce the number of spaces that will be available to vendors. We will be looking at that.
We are always looking for volunteers who would like to be a part of the festival and currently need at least 3 more people on our committee. If you or someone you know may be interested, please email SWF Chairman David Meade at  editor@thejournalonline.com
A meeting of the Springwater Committee will be announced soon.
The Spring Water Festival is one of the longest running festivals in the Upstate.
This will be our 40th year – so we are planning to make it happen if we can!
2021 SWF Application Forms will be posted soon.

A display of unique and original pottery will be on exhibit in the Williamston Municipal Center Exhibit Hall during the Spring Water Festival. The pottery production is a joint venture between Anderson master potter Ross Bryant and local artist/ art teacher Thomas Addison, and features a pottery glaze that is unique to the local area. The glaze on the pottery pieces is a homemade mixture which is created from the “chalybeate” or mineral spring water collected from the mineral spring in the park. The color on the pottery is derived from the high concentration of iron carbonate, which has been a well-known feature of the spring since its discovery in the late 1830’s by West Allen Williams.

There will be a Little Miss and Master Spring Water Festival Pageant held Aug 24th in the Municipal Center Auditorium. This is a fundraiser pageant for The Mill Town Players and Spring Water Festival projects. Deadline for entry is Monday, August 19.
The pageant is for girls ages are 0-18 boys age 0-7. Entry fee is $35. No pageant dresses needed. Only a summer dress or summer outfit. Every participant receives a crown. For info sheet and application please email wking5670@charter.net or call 2300157.

Bob Seymore of Atlanta will bring the fantastic world of STATUARY back to Williamston depicting the town’s founder West Allen Williams.

The 2019 Spring Water Festival T-Shirt is white with blue logo and features the Envision Williamston mural design by Thomas Addison. Addison’s mural design of “Unbroken Chain of Mineral Spring Water”, was brought to life by Palmetto High Art students Kerrigan Campbell and Rebecca Stephen, under the direction of Art teacher Gregg Davis, for Envision Williamston. The mural was the fifth placed in Williamston over the last year and can be seen on the side of the building located across from Calvary Church and near the new Anderson Drive “Gateway Welcome Sign”.

More than forty vendors will be offering handmade, personalized and unique items for sale in the craft area at this year’s Spring Water Festival. There will also be a 5KSpring Water Run and car show sponsored by the Williamston Fire Department and Clinkscales Chevrolet.
Guthrie Grove Church will have a puppet show, games and other activities for children. Buttons the Clown will entertain with balloon art.
Hours for the festival this year will be 6 p.m. to 10 p.m. on Friday and 9 a.m. to 4 p.m. on Saturday.

Organizers of the 38th Annual Spring Water Festival are now accepting vendor, display and run applications for the two day festival August 23 & 24, 2019. Hours for the festival this year will be 6 p.m. to 10 p.m. on Friday and 9 a.m. to 4 p.m. on Saturday.
Any local craft vendor interested in participating in the event can pick up an application and guidelines at The Journal office or online at the Spring Water Festival website at www.springwaterfestival.com.
For more information on crafts contact Beth Watkins at 864-704-4502 or email swfcrafts@gmail.com
Local businesses, and non-profits are also invited to have a display to promote their business at the festival.
Business displays should contact Dianne Lollis at 864-847-5743 or by email at missetta@charter.net.

The festival will again feature one of the upstate’s largest antique and classic auto shows, being sponsored by the Williamston Fire Department. To register contact Steve Ellison at 864-844-7107 or email wfd100@att.net. Also online at www.williamstonfire.com. There will be awards in a number of categories.

The 5K Spring Water Run will be a featured attraction and will be held on Saturday, Aug. 24. The run is sanctioned as an USATF certified course. The 5K open race will begin at 8:30 a.m. There will also be a 1 mile fun run at 7:45 a.m.
The course includes city streets and country roads with rolling hills. Splits will be called at the one and two mile mark and water stations will be on the course. 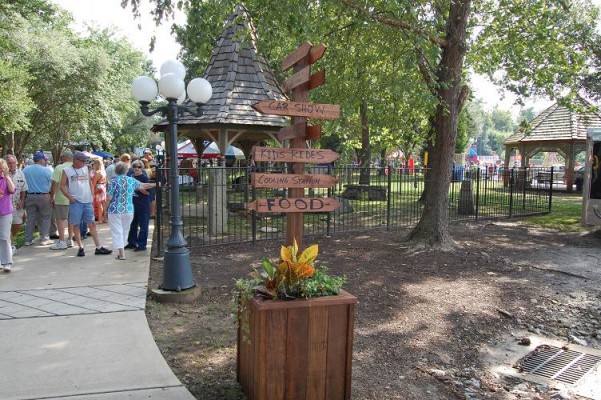 Directions to Festival
From I-85 or Hwy. 29, exit onto Hwy.8 to Pelzer.
Right on Hwy. 20 into downtown Williamston

The 36th Annual Spring Water Festival  will begin a week early this year with the AnMed 5K Spring Water Run being held this Saturday, Aug. 19. The run is sanctioned as an RRCA Grand Prix event. The 5K open race will begin at 8:30 a.m. There will also be a 1 mile fun run at 7:45 a.m. AnMed Health is sponsoring the event and will provide drinks and snacks for runners.
There is still time to sign up for the run. Pre-registration ends on August 18. Packet pickup and pre-registration will be held on Friday, (Aug. 18) from 5 p.m. to 7 p.m. at Ace Hardware, 29 Pelzer Ave. in Williamston.
Spring Water week will also include a Tailgate & Tents
Total Solar Eclipse viewing event beginning at noon on Monday, Aug. 21 on the ballfields behind the Williamston Municipal Center.
Later in the week, the Spring Water Festival will begin on Friday, (Aug. 25) evening at 6 p.m. with food, rides, craft and display vendors.